I’ve been finishing up several spoons that have been sitting around, partially carved, for months.  For me, spoon carving breaks down into these stages:

Here’s what that looks like in a little more detail:

Good crooks are harder to find than it might seem.  Sometimes I find crooks here and there in fallen branches when I’m walking.  Sometimes I’ll come across a bunch at a time where trees have been trimmed or from treetops in recently logged areas.  Rather than risk end grain checks and the loss of the piece, I partially process these crooks right away.  Above, you can see some cherry blanks that have been split.  I could put them in a plastic bag at that point, but I like to get rid of even more excess before pausing. 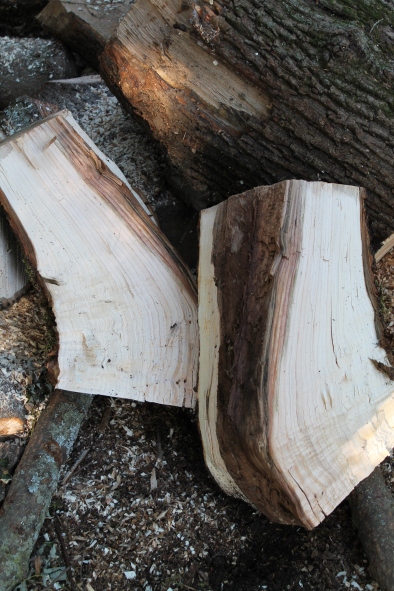 Keep your eyes open when splitting firewood too.  I often find nice crooks within larger logs like the Norway maple above. 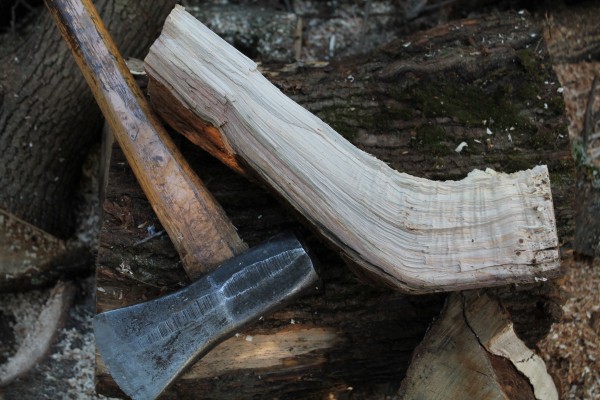 Some further thoughtful splitting can yield some wonderful crooks.  And that could be split again to make two.

So I take those splits and get to work with axe and adze, making decisions on the design of each spoon based largely on what the individual crook brings.  Above are some blanks that have been axed and adzed out.  The adze is used across the grain in this case for shaping, but not so much for hollowing.

That is an ideal stage for storing for later carving.  I place them in a plastic bag, and, if there’s room, into the freezer.  The freezer is only necessary for long term storage when, otherwise, you may get a bit of a science experiment going on in the bag and the wood could get stained.  Most of the excess wood has been removed from the blanks, which leaves more room for ice cream.  Of course, if you’ve got time and only one blank or two, don’t store at all, go ahead and keep carving.

Whenever I get back to them, I do some knife work while they’re still green, including hollowing the bowl.  I want to remove all the wood I can, but still leave a bit for the refinements and surface clean up after drying.  I then leave them to dry for at least a couple days, but sometimes I don’t get back to them for a couple years.  The point is, they’re totally stable at that point and I can come back to them for all of the final carving whenever it works out.  The one’s above are dry and waiting for the finishing knifework.

It’s nice to have a few hanging around in that state; it’s easy to grab one to take with you somewhere, along with a knife.  You can casually carve while hanging out with a friend or just sitting by the river.  No need for chopping blocks and such at this point, and the chips are small and relatively few.

Here are a few above done with the dry knife work and ready for the possibility of decorative carving.  The final lines of the spoon have taken shape and the surface is cut cleanly.

Here, I’m doing some lettering with the pen knife, but there are all sorts of possibilities. 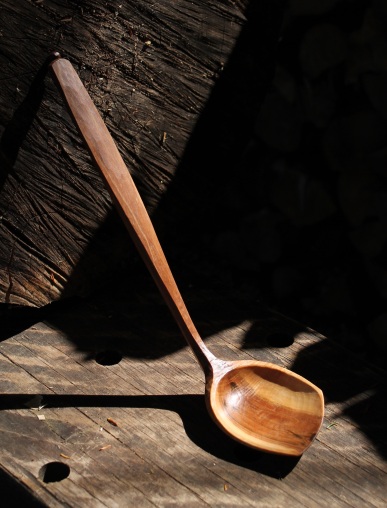 The final step for me is oil treatment.  I submerge the spoon in pure linseed oil (flaxseed oil) for a day or two.  Then I put it in my little lightbulb kiln at around 120 or 130 degrees Farenheit for another day or so.    Then it’s ready to serve.  The one above is one of the spoons from the Norway maple firewood chunk.  I’ll have some others to share soon.