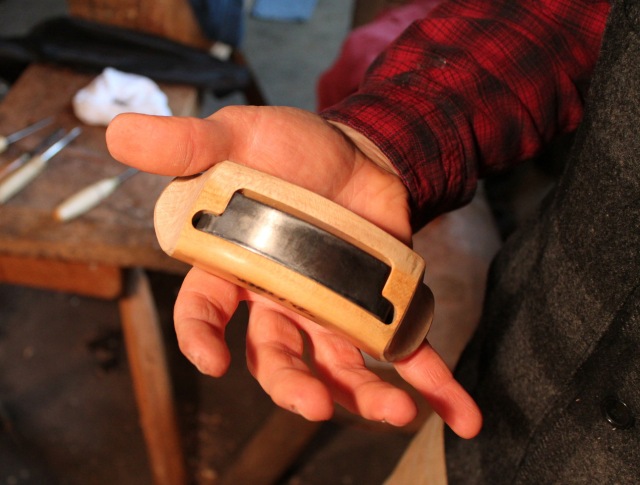 I’ve briefly mentioned the idea of using a travisher on bowls, in this post for example.  The travisher in that post was one I had made years before using a blade that I purchased from Country workshops. I used it for the occasional chair seat and for other tasks.  It’s the one at the top of the photo below:

The travisher below it in the photo is one that I purchased from James Mursell’s website.  I found that it had some great features.  Two deeply recessed set-screws hold the blade firmly in position.  The shavings exit the top rather than the back, allowing for thumbs to be placed on the solid wood behind the blade, great for control and comfort.   The tighter radius (about a 4 1/2″ radius) made it more versatile than my other travisher.

Still, there were some aspects of the design that made it difficult to use for bowls — which is no surprise, since it wasn’t designed for that use.  I experimented and made some important modifications to the body that made it more ideal for bowl shaving.  I’ll show you what I did below.  Pretty simple, really.  By the way, I have absolutely no connection with James Mursell.

Notice the red line I drew on the travisher in the photo above.  Trim the sole back to the red line, leaving about 1/2″ of sole in front of the blade.  The set screws are recessed deeply enough that they’re not affected at all.  In the photo below, that has been done. 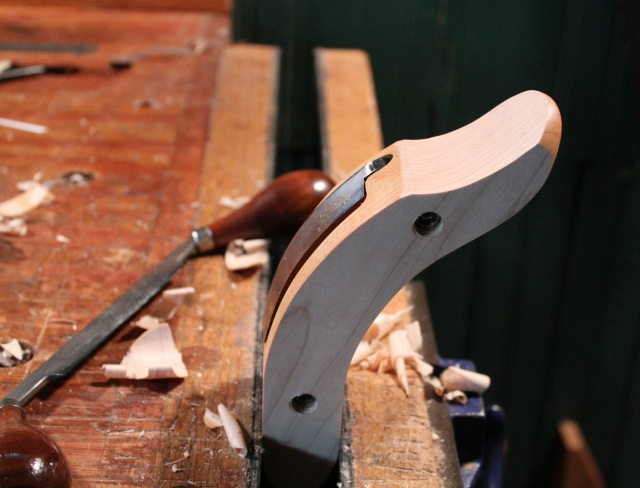 Above and below are two different views of the handles after I shaved recesses to either side of the blade.  This allowed my ring and pinky fingertips to fit under the handles which also helps with control.

The last step is to round the sole in front of the blade down to a line about 1/8″ or so above the existing toe (see the pencil line in the photo below).

You want a gentle arc from the existing wood right in front of the blade down to the pencil line. 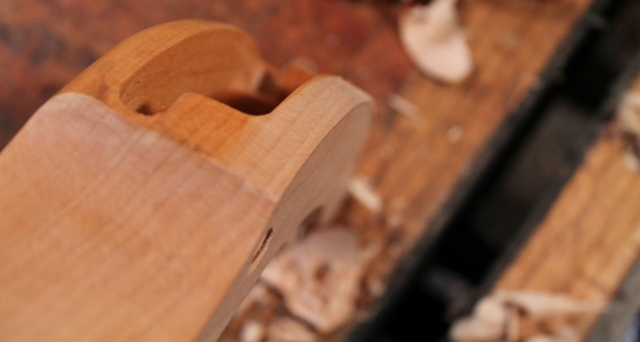 I used a finely set spokeshave, but a rasp or block plane would work as well.

Here’s how I hold it in general.  My thumbs are pressing on the wood behind the blade.

You certainly don’t need a travisher for carving bowls, and it’s really off limits for some bowl designs and sizes, but for general medium to large bowls it can be useful for fairing the hollow.  The compact size makes it pretty nimble and versatile.  I’ve used it occasionally as an intermediate step, but I suppose one could choose to leave the surface directly from the travisher.

Here’s one final shot with a ruler for reference.