Underside of a fan bird carved from pine by Jane Mickelborough.

Ah, dear nature, the mere remembrance, after a short forgetfulness, of the pine woods!  I come to it as a hungry man to a crust of bread.

Less than three weeks now until Plymouth CRAFT’s Greenwood Fest.  The event is really divided into two parts, the Pre-Fest (Tuesday–Thursday) and, well, the Fest (Thursday–Sunday).  The Pre-Fest is like a smaller, more intimate, affair that focuses on specific classes during the day with plenty of time for everyone to share ideas, hang out, swim, carve, or whatever one wishes to do in the evening.  All in the beautiful pinewoods surrounded by crystal clear ponds.

Henry attended the Pre-Fest last year, bringing his enthusiasm, skill, and rose-flavored Turkish delight all the way from Istanbul.

While the Fest proper has sold out, there are just a few spots remaining in a some of the Pre-Fest classes, including Jane Mickelborough’s on carving folding Breton spoons, including wax-inlay technique.  I’d snap it up myself if I weren’t otherwise occupied.  I’ve written about Jane before, most recently in this post about her porte-cuillères.

Maybe one evening, Jane will remind me of how to make the fantastic fan birds.  I didn’t pay close-enough attention last year during one of her impromptu demonstrations. 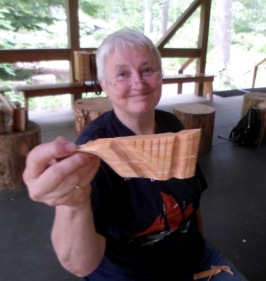 Jane with a pine fan bird ready to unfold its wings.

I can smell the pines already.

4 Responses to Pre-Fest in the Pinewoods