Last week I was splitting up a white oak log.  I used some of the pieces to throw together a low bench to be left outside.  I was ready to shave the ends of the legs down to two inch round tenons and stumbled onto this arrangement with the picket fence and gate that happened to be right beside where I was riving the oak. 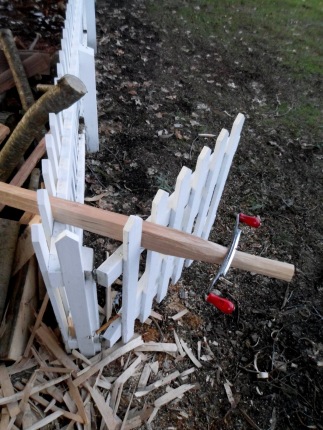 With the gate opened all the way, I set the oak piece on the rails, between the pickets.  Opening the gate changes the angles of the pickets relative to the stock, effectively gripping the wood.  The pulling motion of the drawknife only makes the grip tighter as it tends to pull on the gate.  Might come in handy out there on occasion. 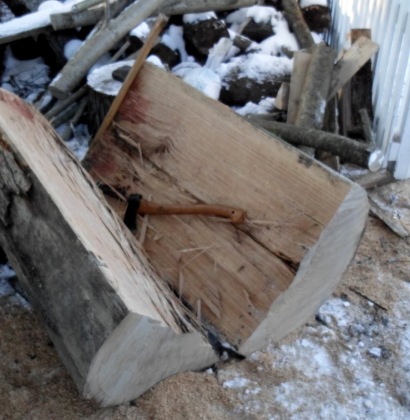 Backing up a bit, here’s the first split of the white oak log.  If you know just where to hit it, it will pop open like that with just one blow of a small axe.

Not really, of course.  Wedges are needed in the early stages.

Once the bolts are smaller, I can rive off some of the more gnarly stuff near the pith.

I continued to split some nice straight-grained bolts into thinner boards.  I have a project lined up for one of these boards, so we’ll be seeing it again someday. 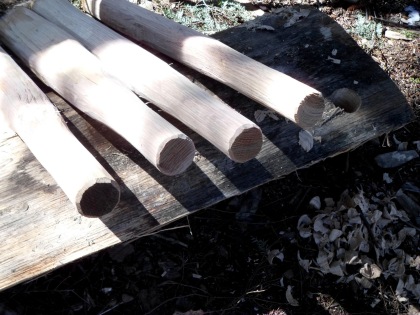 Here are the four legs, tenons shaved.  I just roughly cleaned up the rest of the riven length.

These legs aren’t going all the way through, so no tapered mortises.  I just eyeballed the angles and bored four 2″ holes into the body of the bench. 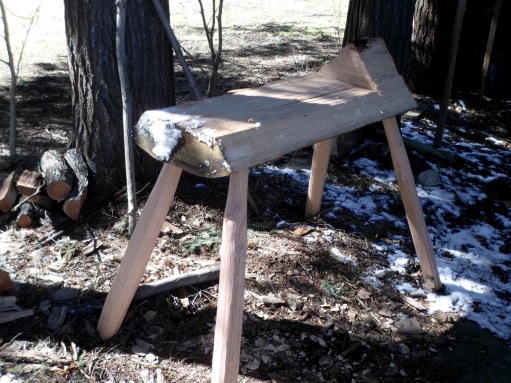 I drove the legs in and popped it upright.  The body of the bench is simply a quarter section of the log with a portion of the center split away to create a rough flat.  Sometime, I’ll flatten the top a little more and bore some holes for holdfasts and pegs.  The triangle on the end will have its peak knocked off, leaving a raised lip.  I’ll cut off the legs to lower the bench and get it all sitting level.

Won’t be long until I’m carving bowls under the hemlock trees.