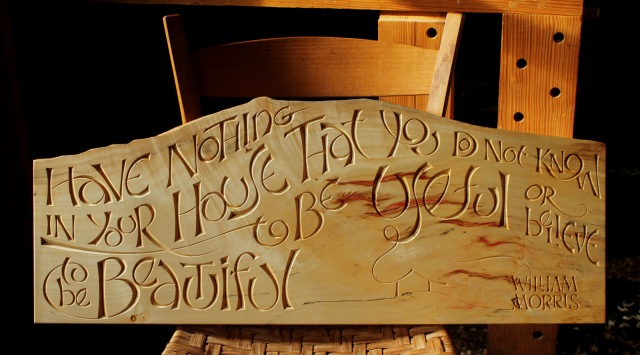 Box elder board carved with William Morris’ quote: “Have Nothing in your house that you do not know to be useful or believe to be beautiful.”

Every project is another opportunity to learn, and I’ve learned a lot while lettering.  Carving this large box elder, a.k.a. ash-leaved maple, board (30 5/8″ x 12 1/4″ x 1″), just finished, reminded me of some of the differences between carving large pieces and relatively small pieces.  The most noticeable distinction is that smaller pieces can be manipulated with the non-knife hand (I’ve written some posts about my pen-knife lettering, including this one).  In fact, I’m usually rotating the bowl or spoon more than the knife.  That doesn’t work with a big board like this.

The size of the letters and the hardness of the wood can also call for me to adjust my methods.  The letters in “useful” are roughly three inches high.  Unless the wood is very soft, letters this large require more than a penknife.  So I excavate most of the material with carving chisels, then refine the sidewalls with the pen knife and skew chisel, among other tools.

As with bowl carving, the refinement stage takes me much longer than the roughing stage.  I’ve learned to take off my watch and put the clock out of sight during these sessions.

I want to use some other recent lettering projects to share a few things I’ve learned:

On most pieces I letter, I can’t transfer a sketch directly from paper to wood, because the surfaces I’m lettering aren’t flat.  The handles of bowls, for example, are usually convex in both directions.  Paper would just wrinkle and bunch.  I often work out some planning sketches on paper, then draw the letter outlines directly onto the wood. 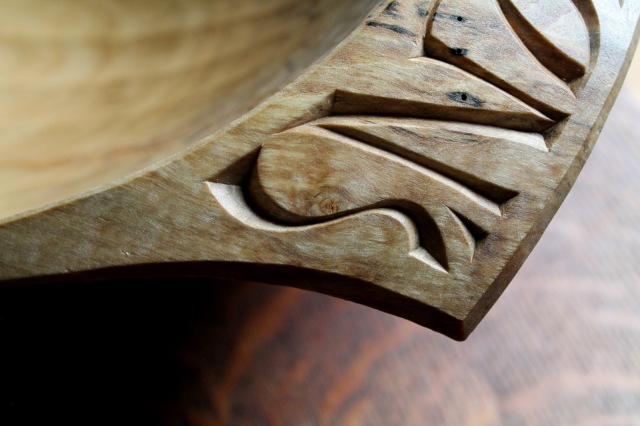 Lettering on sculptural pieces usually requires drawing of the lettering directly onto the wood.

For lettering on a flat surface, I’m able to work out the final design through a series of sketches on paper, then transfer to the wood with graphite paper.  Still, I’ll make some final adjustments on the board itself.

Going through the designing and carving process has also taught me to keep the eventual execution in mind while I’m drawing.  I know very little about names for fonts and typefaces and all that, but I know that some are better suited for carving than others.  Design with the medium and method in mind.

Here’s a very different application of lines and lettering.  For relatively thin lines like those carved on this cherry bowl bottom, the knife alone does the job, even in woods that are pretty hard.  Same idea with lettering on spoon handles and such.

And the penknife still works well directly with somewhat larger letters in relatively soft timber.  The letters of this fun nameplate were carved in basswood with the knife. 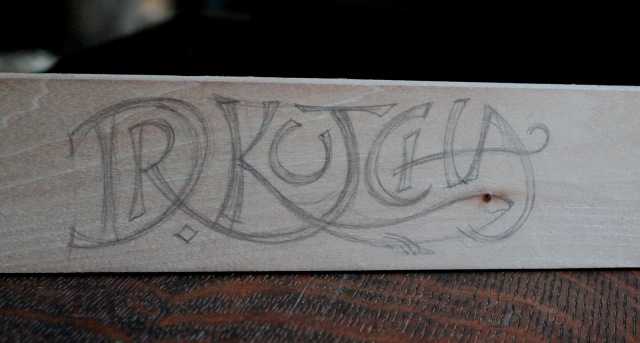 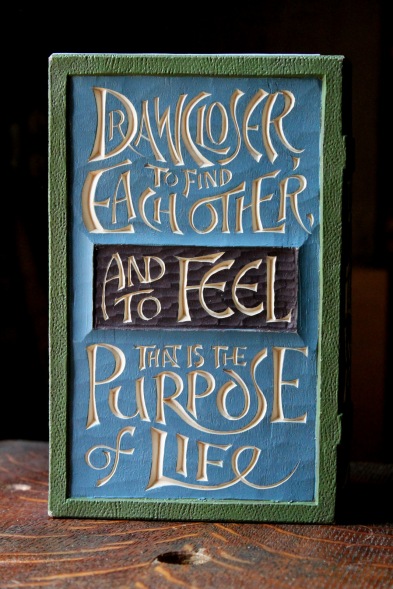 Another example is the lettering on this shrink-book.  It’s a rectangular shrink pot in the shape of a book with a sliding lid.  Made for my daughter, the line is from one of her favorite movies, the film version of The Secret Life of Walter Mitty. 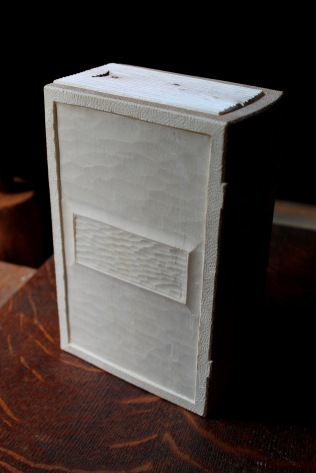 It would have been much more challenging to carve all that lettering directly with the knife in a harder wood, but it worked well in this aspen.

The carving on the underside of the small lid would have been very difficult to complete if the lid was secured to a bench.  It’s the dance between the off hand and the knife hand that makes the carving a pleasure to execute.

Of course, letter carving in wood offers constant lessons in adjusting to the grain of the wood.  Not necessary with stone.  I’ve only done a few experiments in stone, including this one in remembrance of a friend’s dog.

My brief experience has taught me that executing a carving in stone is different from working with wood in many ways, but the design considerations are much the same.  In fact, some of the best books about letter carving focus on work in stone — but can teach a lot even if wood is your medium.  One of my favorites is The Art of Letter Carving in Stone by Tom Perkins — packed with insight and inspiration.

16 Responses to Learning from Lettering