In a Bowl Care May Not Be

The inspiration for this bowl goes back to the Middle Ages.  It seems that the unpopular English King John (the same that inspired the legend of Robin Hood) planned to build a hunting lodge (another version suggests a royal road) near Gotham, a little village not far from Nottingham.  That was a little too close for comfort as far as the residents of Gotham were concerned, but how to dissuade the King?

The villagers agreed to a plan by which they would, in various ways, act like mad fools engaged in crazy pursuits.  When the royal scouts reported the scene in Gotham to King John, he decided to build elsewhere, frightened and duped by the “Wise Men of Gotham.”

A later version of the Gotham Tales

Although these stories are believed to have existed in the oral tradition as early as the 12th century, they were first published in the 16th century as “The Merry Tales of the Mad Men of Gotham.”  Among the tales is that of a man carrying sacks of grain over his shoulders as he rides his horse so as not to overburden the horse.  We also learn of the villagers’ attempts at drowning an eel as punishment for eating so many fish, and the man who lights his smithy on fire to remove a wasp nest from the thatch. Maybe the best known story is that of the failed attempt to fence in the cuckoo bird; it seems they built the fence too low.  The “Cuckoo Bush Mound” can still be visited in modern-day Gotham — population 1800.

These stories have inspired many creative efforts over the centuries since.  In fact they inspired Washington Irving to satirically nickname New York City “Gotham” back in 1807 in the magazine Salmagundi.  And if you want to look more deeply into the Batman connection, you can start here.

Well, I’m no Washington Irving (like Yossarian in Catch 22), but this bowl too was inspired by one of the Men of Gotham tales.

The particular tale is of three wise men of Gotham setting off in a bowl to rake or net the moon from the sea.  But of course, each time they engage their tools the moon scatters into pieces and eludes their grasp, only to reappear whole as before.  This episode led to a simple nursery rhyme in the 1765 edition of Mother Goose, printed below from the 1901 edition: 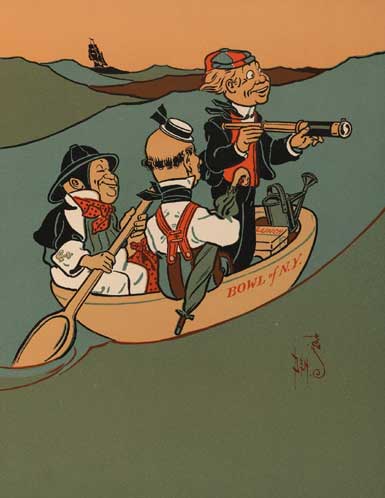 My daughter’s decade-old Three Men of Gotham toy/bowl.  Complete with dings and stray nail polish, as it should be.  We’ll find the net one day…

The same story seems to have captured the attention of English writer Thomas Love Peacock (1785-1866).  He wrote a couple poems based upon it, one beginning with the line, “In a bowl to sea went wise men three, on a brilliant night in June: They carried a net, and their hearts were set on fishing up the moon.”  Years ago, when my daughter was a little girl, I carved and painted a bowl, three figures, and a net for her based on that one. The lines I carved on this walnut bowl, however, came from another, more thoughtful, of his poems titled Three Men of Gotham:

I find it interesting how he has taken this centuries old fun tale of feigned madness, and infused it with deeper meaning.  Captivated with the idea of the bowl as a sort of sanctuary from care and worry, I decided to carve the repeated line, “In a bowl Care may not be.” on the handles of this bowl.

I wanted the bottom of the bowl to provide a hint of context for the excerpt, so I sketched an illustration that captures the scene as I imagine it.  It features a representation of this particular bowl carrying the three wise men of Gotham.  This was then transferred to the bottom of the bowl and v-incised with a knife.

Below are some more photos of the bowl, including the incised carving on the bottom.

The chair provides a sense of scale; this bowl is big and deep: 24 inches long, 13 1/2 inches wide, and 4 3/4 inches high, all heartwood black walnut.

This work was done with the pen knife blade.

A pre-oil shot.  I think I’ve seen a beard like that before.

Letters this size in walnut require some chisel and gouge work, but the knife blade still bears much of the duty.

And a few outside shots after the rain ended to better indicate some of the exterior form, consisting mainly of four sculpted facets.  These outer surfaces were left from the drawknife with a little gouge work just under the handles.

This entry was posted in Uncategorized. Bookmark the permalink.

12 Responses to In a Bowl Care May Not Be