Swallows in Wood and in Motion

Last week, I finished these two swallow inspired bowls, one in maple and the other in cherry.  Then I found myself in Lou’s barn, a swallow haven.

My friend Lou is a part-time sawyer who knows more about trees than just about anyone I know.  Lou’s property is graced with an enormous grey time-worn barn that shelters lumber, equipment, and dozens of happy swallows.  Truthfully, it bothers Lou that the swallows don’t clean up after themselves, but that didn’t seem to matter as Lou and I watched the swallows dart after bugs over his garden in the evening.  And it’s not just that they catch bugs, it’s the way they catch bugs; truly poetry in motion.

Here is a short film that slows the magic down for us:

Here is the maple branch crook from which the larger of the swallows was carved.  How can you go wrong with a branch like that?  The swallow is practically flying out of it!

And, speaking of birds, I also finished another cherry duck bowl (ale duck?). 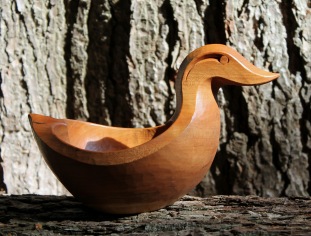 And if you’re still not sure that it’s a duck….

2 Responses to Swallows in Wood and in Motion