This past winter I made a couple rocking chairs from white oak.  An extra bolt from the white oak log had been sitting around since then, and I decided to carve a bowl from it.  I guess I’m a glutton for punishment.

After studying what the piece had to offer, I decided upon an overall form with some side panels that serve as a canvas for some decorative carving.  I’ve done some bowls similar to this before, such as the one, in cherry, to the left.  Depending on the log and/or preference, the form can be altered in many ways.

I also thought it might be a good opportunity to discuss some options for bowl layout. And who doesn’t love to discuss bowl layout?!  Okay, you can put down your hand now.

Granted, there are more exciting aspects to hewing a bowl.  No chips are flying around during layout.  And the best layout can certainly go astray.  But carefully considered aesthetic judgement at the beginning of the process usually pays off in the end.  In other words, there is a lot that goes on between the lines, but good lines are an important start. 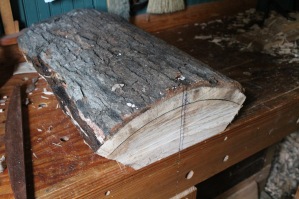 Establishing the arc representing the top surface of the bowl

My first step is to establish the bottom and top surfaces of the future bowl.  In the case of any bowl, the bottom is a flat plane, and the top can be as well.  But on this bowl, the upper surface is an arc, which creates a sweeping rim.  I’ve discussed this at greater length at this previous post.  On this piece, I wanted to remove the sapwood that the bugs had been enjoying.

Layout on the upper surface of the bowl blank

I extend the vertical center lines across the top and bottom of the blank, then begin layout on the upper surface.  I rely on a compass or two during this process.  The series of circles represent my playing around with possible widths of the bowl to allow for the depth of the side panels.  Ultimately the two lines surrounding the green area, representing the upper rim of the bowl are all I need before carving.

Normally just understood rather than drawn, these lines represent an end-on view of the layout for the bowl.

However, to help with visualization, I added an illustration on the end grain of this log.  The green area represents the upper surface of the rim and the handles that will drop down to the purple area at the ends.  The blue area represents a cross-section of the bowl at it’s widest point.  The red area represents the side panel surface when viewed from the end.  Due to the shape of this bolt, the vertical depth of these side panels was limited.  Different logs will allow for many other variations.

After the bowl cavity has been hollowed, I will hew the surface of these side panels.  Upon that new surface, I can then draw the bottom edge of the side panels (represented by the lower line) and sculpt the underside of the bowl.